Menu
Do you have a child due to start school in September 2023? We invite you to book a tour to visit our school. Sign-up via our website on https://www.chandlersford-inf.hants.sch.uk/starting-school-september-2023/ or find the page on the 'Parents' tab. Any queries please contact the school. We look forward to meeting you.
A Search
B Translate
C Login Log in
Menu Close 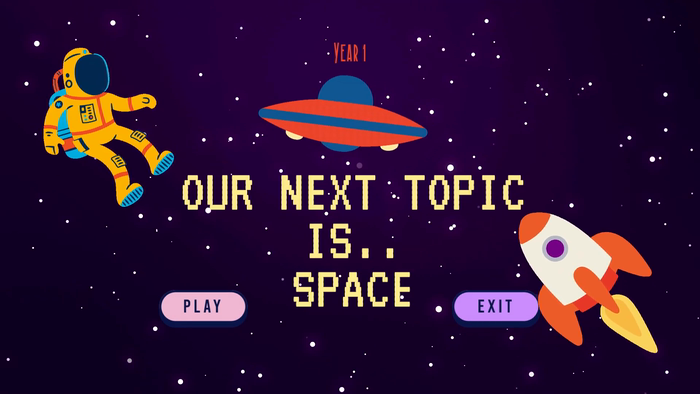 This half term our topic is "Space" and we will be exploring Neil Armstrong and the first landing on the moon.

Things that you can do at home linked to our topic:

Solar System for Kids video - Exploring Space. Watch as Jupiter takes us on a journey around our Solar System and all the main space objects in it. Watch as we see Planets, Dwarf Planets, Asteroids and many more Solar System objects. In part 1 we see the first ten objects - who will it be?

Subscribe to KLT: https://www.youtube.com/channel/UC7EFWpvc1wYuUwrtZ_BLi9A?sub_confirmation=1 Listen to KLT Music on Spotify: https://open.spotify.com/artist/3RvQsrlQFlGXHeLl1Vl9e0?si=Q-yVLAGmQEO-4hnbXvWe_Q&nd=1 Learn the 8 planets of our Solar System -- Mercury, Venus, Earth, Mars, Jupiter, Saturn, Uranus and Neptune -- with the Planet Song by KLT!

The Planets Song is a science song that teaches the planets in our solar system. Get unlimited teaching resources: https://www.havefunteaching.com/. The planets song teaches Mercury, Venus, Earth, Mars, Jupiter, Saturn, Uranus, and Neptune. (Remember...Pluto is now labeled as a dwarf planet) This is a Planets Song for learning the planets.

The StoryBots are curious little creatures who live beneath our screens, offering a world of learning and fun for kids. The Emmy Award-winning "Ask the StoryBots" is now streaming on Netflix! #StayHome and Learn About Outer Space #WithMe !